While I enjoyed every aspect of Idlewild that I included in my book, one of the most compelling, challenging and fascinating subjects I researched was the history of merry-go-rounds and carousels at the park. This is the second in a series of blog posts that I hope will create a comprehensive history of this beloved attraction at Idlewild and highlight the sources that I used. Part One can be read here. This is a work in progress and my posts will be updated as more information is discovered over time. Please feel free to contact me if you have any useful sources – newspaper articles, pamphlets, company records, photographs – that can add to my research. Thank you!

In my previous blog post in this series, I covered the earliest newspaper references to merry-go-rounds at Idlewild Park before 1891. Unfortunately, we may never be able to corroborate these accounts or glean any additional details about these devices. Park histories have traditionally identified the first merry-go-round as one that debuted in 1891. This season marked the first significant slew of developments at Idlewild with the addition of the park’s first man-made lake (Lake St. Clair), a new large dining hall and a mammoth dancing pavilion called the Auditorium, among other improvements, including the aforesaid merry-go-round.

Idlewild’s new attraction was owned or operated by a retired oilman named Moses Buffum (M.B.) Parsons of Ligonier. (Parsons’ occupation is given in his death certificate below.) Sometimes his name was misspelled as Parson. Born in Westfield, New York in 1838, Parsons eventually lived in Johnstown, Pennsylvania, but by 1889, the newspapers began reporting his appearances in Ligonier, probably after he retired from the oil industry. In late 1892, he married Elsie D. Menoher, a member of a well-known family in the Ligonier Valley. Elsie’s brother owned two hotels in town. The couple soon settled in a brick house on the corner of Market and Loyalhanna Streets in Ligonier Borough and had two children, son Harrison (b. 1894) and daughter Carolyn (b. 1899). This was presumably a second marriage given the couple’s approximately 25-year age difference and the fact that Moses had an older daughter from a previous relationship who died in 1897. By 1899, it appears that Parsons found himself in some financial difficulties, filing for bankruptcy that year. The family moved to Pittsburgh in 1900. Moses Parson’s death certificate from 1912:

So how did Moses Parsons become interested in operating a merry-go-round at Idlewild? That may never be known, but we do know he became involved in 1891. In his 1955 doctoral thesis, “The Ligonier Valley Rail Road and its Communities.” James Madison Myers details an agreement between M.B. Parsons and Ligonier Valley Rail Road superintendent George Senft for a merry-go-round that season. Senft signed a lease with Parsons for a space in the park on which he would operate a “steam riding gallery” for no less than 56 persons. Parsons’ rent was 50 percent of the daily gross receipts and he was responsible for maintaining rider safety as well as his employees’ behavior.

Unfortunately, the Ligonier Valley Rail Road papers that Myers cites as the source of the lease information have not been found, so we cannot fact-check this passage. There is a discrepancy between the date of the lease in the text (March 10, 1891) and in the footnote (January 10, 1891). This is the only existing source (so far) that ties Parsons to a merry-go-round at Idlewild in 1891.

There is only one newspaper reference to a merry-go-round at Idlewild in 1891. From the August 12, 1891, issue of The Ligonier Echo:

The revenue that the merry-go-round generated was apparently satisfactory enough for Senft to arrange a new contract for 1892 with a surety and continue a business relationship with Parsons that included a two-year agreement covering the 1895 season. A surviving letterpress book that contains copies of Ligonier Valley Rail Road superintendent George Senft’s correspondence reveals some details about the concession agreement between the LVRR and M.B. Parsons, at least in respect to the 1892 season.

From a March 18, 1892 letter from Senft to illegible name regarding Parsons’ contract for the merry-go-round privilege, which he left with R.B. Mellon, along with three judgement notes upon which is a guarantee.

The Parsons merry-go-round generated business during the 1892 season. From a letter from Senft to Rev. Hartzel regarding a check to be sent to Parsons for 50% of the merry-go-round proceeds dated August 4, 1892:

However, could Myers have gotten the year of the initial lease with Parsons completely wrong? Did Parsons enter into proprietorship in 1892, not 1891? Based on newspaper reports, Parsons bought out the merry-go-round at Idlewild and put a new device in for the 1892 season. From the May 11, 1892, issue of The Ligonier Echo:

A “Neighbor” who returned to his native land for the 1892 Ligonier Valley picnic submitted his recollections of his visit to the area, which included some impressions of the merry-go-round that gave a small detail about the cost to ride the machine – a nickel got you two rides. From the October 5, 1892, issue of The Ligonier Echo:

Some newspaper reports revealed the Parsons merry-go-round’s whereabouts during Idlewild’s off-season. While the amusement itself was stored in a local warehouse, it appears that the organ provided music for at least two local hotels in Ligonier (see National Hotel mentioned above; Hotel Loyalhanna is likely the Menoher House, later the Commercial Hotel; both hotels were owned at one point by John Freeman Menoher, Parsons’ brother-in-law) and for at least one sleighing party through town. It was described as a German organ. 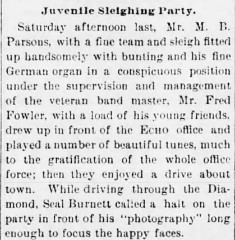 Unfortunately, we don’t know the manufacturer of Parsons’ merry-go-round(s). It does appear that at least one of however many he set up at Idlewild (assuming he upgraded or replaced them) came from somewhere in New York. The Parsonses also owned vineyards in western New York where Moses would take frequent business trips, so it’s possible he sourced his “steam riding gallery” from an upstate New York company (Armitage-Herschell Company, perhaps?). From the November 14, 1894, issue of The Ligonier Echo:

I connected with Fred Dahlinger, Jr., author, historian and expert in amusement park, carousel, band organ and circus history. He provided invaluable insight on what Parsons’ machine and accompanying musical device may have been: likely a track machine with static figures and an externally mounted boiler and cable drive engine. (Thank you Fred!) According to Fred, the phrase “steam riding gallery” would “surely seem to indicate a North Tonawanda-built ride, by Armitage-Herschell, as you deduced, with an imported (German or French, usually) band organ. These were usually smaller, cylinder-operated, military style, with brass trumpets, clarinet and piccolos, and not necessarily drums or a cymbal…These rides were portable, hauled on perhaps two wagons, with the steam boiler and engine on integral wheels.” (Information kindly provided in email correspondence to Jennifer Sopko from Fred Dahlinger, Jr. October 30, 2019 and November 20, 2019.)

Manufacturer notwithstanding, under Parsons’ management, the merry-go-round became the most popular attraction at Idlewild Park particularly during large group picnics like the Ligonier Valley Reunion on August 23, 1893 and the Reformed Church Reunion on August 24, 1893. From the August 30, 1893, issue of The Ligonier Echo:

Apparently, Parsons’ device was not exclusive to Idlewild Park, as he procured privileges to operate the merry-go-round at other locations. From the September 13, 1893, issue of The Ligonier Echo:

Another letter from George Senft to T. Mellon & Sons dated September 2, 1895 also corroborates the Parsons merry-go-round operating at Idlewild in 1895. Senft sent the company a check to sign for Parsons’ proceeds from the concession. This would be Parsons’ final season as a merry-go-round proprietor at Idlewild.