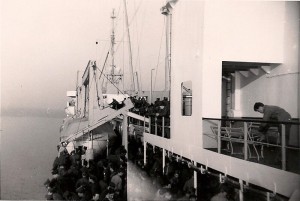 Camp Stoneman was the last stop for servicemen before they were deployed to the Pacific Theater of Operations from Fort Mason, which was a U.S. Army headquarters at the San Francisco Port of Embarkation.

After they were processed at the base (which usually took several days), servicemen usually left the Pittsburg waterfront via army-operated ferries and traveled about three to four hours to the San Francisco docks where they boarded ships and set out to sea.

EDIT: A helpful commenter on another post whose father was stationed at Camp Stoneman as a young officer shared his memories of growing up there and fishing off the pier on the weekends during the school year and his summer vacation. “The ferry dock was completely covered over, with three walls. It was open on the river side. The roof was very high. Troops were not marched to the ferry building. They were usually taken in big “cattle car” type truck trailers…Troops all lived in the traditional WWII two story wood barracks. Our family quarters were long WWII hospital wards each cut into 4 or 5 two bedroom apartments. They are all gone now, but were along the Contra Costa Canal east of Railroad Ave.”

“Well, a young man ain’t got nothin' in the world these days…” 🎶 Except another chance to see the greatest rock band of all time!✌🏻😎 Thank you to @officialthewho for a fantastic concert at @theschottensteincenter! 🎸🥁🎤🎻🎺🎶